BOISE — The forest in and around one of the nation’s top ski destinations is in trouble from an ongoing combination of unusually warm temperatures, drought, wildfires, insect invaders and pathogens, officials say.

Officials to Decide on Nuclear Reactor Site in Eastern Idaho

IDAHO FALLS (AP) | A Utah energy cooperative is narrowing down its selections for a site to build a small commercial nuclear reactor in eastern Idaho.

IDAHO FALLS (AP) | Scientists from around the country are meeting in Idaho Falls this week to discuss technical problems plaguing a nuclear waste treatment plant there.

Transit Hub to Open in Bellevue

BELLEVUE (AP)• A central Idaho bus service is scheduled to open a new transit hub in Bellevue next month.

Mountain Rides Transportation Authority’s south-valley transit hub in Bellevue is nearly completed, with a ribbon-cutting ceremony scheduled for mid-January, according to The Idaho Mountain Express.

“We’re having a construction meeting with our contractor on Friday to figure out the specific date we will be moving in,” Maintenance and Facilities Manager Ben Varner said. “We’re at the point right now where most of the finishes are already put in, the office and conference room have been painted, phone and Internet lines have been dropped in and the floor where the buses are going to be stored overnight will be epoxied early next week.”

The new facility will be used for bus maintenance and storage of up to five buses. It also includes a passenger waiting area and a small park-and-ride lot for commuters.

“We’re hoping to have a grand opening and party down there (Bellevue) with all of our funding partners and the public to come see the new facility and our newly purchased 35-foot bus that was inaugurated on the Valley Route Wednesday afternoon,” he said.

Varner said a ribbon-cutting ceremony and public celebration for the south-valley hub and new bus will be announced as soon as a completion date is confirmed with the project’s contractor.

Nevada Ranch is Using Waste Water to Survive the Drought 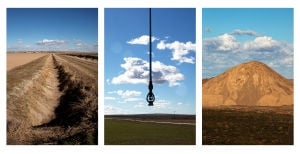 RENO, Nev. (AP) | At Douglas County's Bently Ranch, these days the backup is squarely up front.

Reclaimed wastewater is used to water crops late every irrigation season, but this year, during a protracted drought, it's largely what's keeping the place in the business of agriculture.

"If we were just on surface water, we would have stopped irrigating a month ago. We'd be dry," said Matt McKinney, ranch manager. "Now we can go all summer long. It's a lifesaver."

It was a decade ago that the ranch's founder, inventor and philanthropist Donald Bently, first signed a contract with the sewer districts serving Minden-Gardnerville and Lake Tahoe's Zephyr Cove area to receive effluent water for irrigation use.

All winter long, treated wastewater is pumped from the two sewer districts to a reservoir built on ranch property. Come summer, the water is used to irrigate Bently Ranch's primary crop, high-quality alfalfa hay, which is in turn sold as cattle feed to dairy farms in California.

Bently Ranch also receives "biosolids" from the wastewater plants — a combination of fecal matter and household garbage put down sink disposals — which is combined with wood chips and green yard waste to ultimately produce fertilizer in the only such major composting operation now existing in Northern Nevada.

It's agriculture with a full-circle, sustainable philosophy that is now paying off big-time.

At Bently, the drought has posed the same challenges as it has to farms and ranches across Nevada. Back-to-back dry winters produced a dismal Sierra snowpack that drains into the lush agricultural fields of the Carson Valley, with the past winter the worst one yet. On April 1, the Carson River Basin's snowpack was officially measured at 4 percent of normal for the date, according to the U.S. Natural Resources Conservation Service.

"It was the lowest in history," McKinney said. "Every year we have a certain amount of water, but this year that pie was pretty small."

As he had the previous two drought years, McKinney sold off some of Bently Ranch's beef cattle, with about 600 sold in all thus far due to worsening drought conditions. McKinney fallowed some 500 acres that otherwise would have supported alfalfa or other crops grown at Bently Ranch such as wheat, rye, barley and oats.

The situation looked dire, with McKinney predicting the ranch would be cut off from all Carson River irrigation water by June 1. Then came that unusually wet May — a blessing to agriculture across the state — that dropped rain particularly beneficial to pastures used for grazing the ranch's cattle.

Once the benefits of those spring rains faded away, Bently's unique irrigation source of reclaimed water came fully into play. In a drought year where many Nevada growers have had to substantially cut back on their alfalfa crops, McKinney expects to get three full cuttings and a portion of a fourth.

"That's where that effluent water is saving my butt," McKinney said. "Mr. Bently was always forward thinking. When that water became available, he jumped at it."

The contract making that water available remains in place another 65 years, guaranteeing continued long-term access to what has proven to be a crucial backup supply of water.

Benefits are also enjoyed by the sewer districts and their customers, with Bently providing a ready location to dispose of both effluent water and the solids used for composting that otherwise would have to be taken to a landfill at significant expense, said Frank Johnson, manager of the Minden-Gardnerville Sanitation District.

"The effluent is waste that we in agriculture can make use of," McKinney agreed. "We're making it into a product. Before it was just waste. We have an insurance policy, or money in the bank, whatever you want to call it."